Session bass legend Carol Kaye did a one-night-only clinic at West L.A. Music in Universal City on Thursday night. After a friend recommended it to me, I thought it just might be a cool event to go to. What I didn’t expect was to learn a while ton about music from one of the most heard session bassists in rock music history!

For those of you who don’t know the name, you’ve definitely heard the bass. She played bass guitar for such classic songs as the original theme song to Mission: Impossible; The Beach Boys’ “Good Vibrations,” “California Girls” and the entire legendary Pet Sounds album; Joe Cocker’s “Feelin’ Alright,” and a number of Motown classics from the Supremes to the Four Tops to Marvin Gaye.

Born in Washington state and raised here in the Los Angeles area (Wilmington), Kaye, now 72, started playing professionally at age 14 as a rhythm guitarist and picked up the bass when it literally fell into her lap as the session bassist failed to show up.

The clinic featured her trademark pick-on-flatwound strings bass playing (amazingly good – for a 72-year old!), as well as some tunes and examples of guitar, showing the crowd of about 30 (including a number of women) how to keep a drummer from playing too slow or too fast, groove techniques and how to better read music at a recording session. Also, her “war” stories of working with such legends as Les Paul, Ray Charles, Mel Torme, Quincy Jones, Brian Wilson and even Phil Spector were priceless.

I even got a question in regarding playing with a pick. I told her that I long considered myself an “anti-pick” player but watching her play deftly with a pick inspired me to want to do it, so I asked her about the proper pick-playing techniques. I also won a free Ibanez (the guitar company that sponsored the event) t-shirt!

At the end she signed autographs, answered other questions, even received a bouquet of flowers from another attendee of the clinic and posed for pictures. I got mine below: 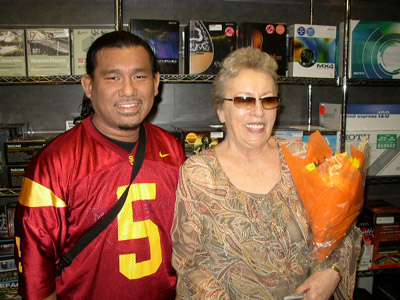