Last Saturday, we did our sixth consecutive appearance at the Lotus Festival in Los Angeles’ Echo Park – a traditional summertime L.A. event.

But we didn’t expect it to rain.

That’s exactly what happened in the middle of our set. It’s safe to assume that this is the first time it’s happened in the entire history of the festival (which has gone on for most years since 1972), and that we were the first – and only – act ever to get rained on!

The Soul Barkada members arrived there around 3:30 p.m. in preparation for our 5 p.m. set and we had our gear transported backstage. Here was the vibe just before we went on:

We finally took to the stage but had to wait for the sound techs to get all our signals set up in the board, namely my keyboard. We were introduced by Filipino American actor Dante Basco, best known for his role as Rufio in the 1991 movie Hook. How’s that for your Hollywood celeb encounter?

All was going well, especially for our guitarist, August, drummer Jay (who brought his family down to check out the show) and bassist Larry, who saw us as a spectator at our very first Lotus Fest show (and first show ever) in 2004, and is now playing with us onstage.

It started to rain right before we played our third song, which was our bossa nova cover of “Dahil Sa Iyo,” this time with a full band arrangement. I suddenly saw drops of water not just in front of me on the stage, but right on top of my keyboard! 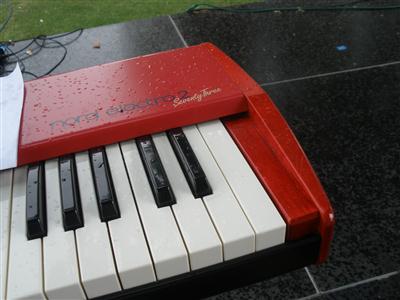 First of all, IT DOES NOT RAIN ON THE LOTUS FESTIVAL! It’s normally 80-90 degrees, very hot and very sunny. But on this humid, cooler-than-normal day, the precipitation just had its way. As if on cue, the hundreds of people situated on the lawn in front of us seemed to fled, but the show had to go on, so we played (while at the same time I feared electrocution…).

Well, fortunately that never happened, and we played a great set of “Brand New Thing,” our new song, “Why Love?” (performed by the full band for the very first time) and “Dahil Sa Iyo.” We were supposed to do “Hearts,” but cut that and closed with our cover of Michael Jackson’s “Another Part Of Me.”

Fortunately Jay’s wife was able to take some video of the Lotus Fest, which includes our MJ cover:

Finally, after leaving the stage, this is what we were up to:

In hindsight, it was another great Lotus Festival gig; the rain was a minor threat (which didn’t last too long; it was over by the time our set ended) and it only made this year’s show that more interesting. At least we knew that we made history that day.