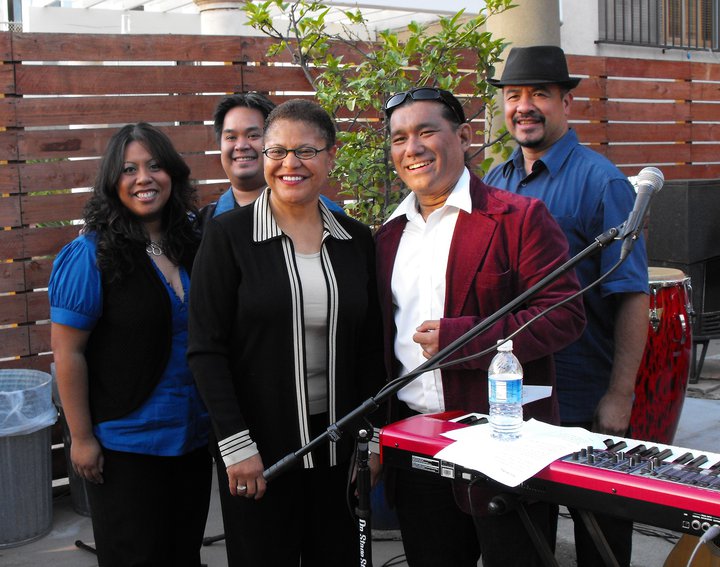 Since performing a fundraiser and a subsequent Election Night Party for Los Angeles City Council President Eric Garcetti, Elson and the Soul Barkada has been in demand on the political circuit, this time, performing at a grassroots fundraiser for U.S. Congressional candidate Karen Bass (pictured above, surrounded by Lisa, Louie, myself and Keith) near Los Angeles’ Koreatown district earlier this evening.  Yes, it’s one of those rare occasions where my musical and community lives intersect.

With the fundraiser taking place in the backyard garden of  private residence, it was just Keith, Louie, Lisa and I doing a semi-acoustic set, where we mixed originals with relevant covers, like Marvin Gaye’s “What’s Goin’ On” and Harold Melvin and the Bluenotes’ “Wake Up Everybody.” It was a real bare-bones setup, with Louie and Lisa doing backgrounds, Keith on percussion and me alternating on keyboard and acoustic guitar (I was wearing shades most of the set, not to look cool, mind you, but because the sun was shining directly at us)!

But the big hit of the night was “The Karen Bass Song,” a fun little p-funk (political funk, that is) ditty in the similar vein as last year’s “Are You Ready (For Garcetti)?”

The candidate and the crowd (clapping and chanting along) loved it, but most of all her campaign staff totally dug it. So much, that they asked if we could play at her Election Night party in November! Consider it booked!

Also, one of the attendees of the event was Janelle So, host of the Filipino community talk show Kababayan LA, which airs on KSCI 18. We were introduced to her and she wanted to book us as guests on her show next month.

Things have been happening…