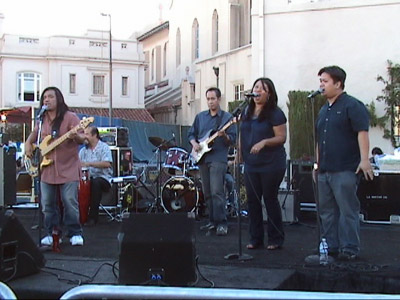 Last year when we played at the Blessed Sacrament Parish Carnival, I cynically and half-jokingly said, “Oh, the next time we’ll get to play together again is next year’s Carnival!”

I was sort of right.

Even though we did the “trio” show for Lotus Festival, yes, this is the first time the band really played together. Especially Louie and Lisa and Keith, who haven’t played out with us all year. Vince was there and Alan held it down on the drums for the afternoon.

Since our set wasn’t later in the evening like before, we didn’t get to play as early as scheduled (2:30 p.m.) due to an electrical problem at the stage that existed before we arrived. We did our thing, and people were trippin’ over Keith’s D-Beam-controlled chimes from his HandSonic. No huge crowds like the last few times, but at least some friends from their choir showed up as well as our friends Moonie, Lovella and Elvin. We were also the sole English-speaking (singing?) band at the festival – the one that’s made up of folks of Philippine ancestry!

It was just a part of a busy day musically. Early in the morning I played and sang at Cathedral Chapel and then after the gig, I decided to sit in with Louie, Lisa and Vince in the Blessed Sacrament choir (of which I used to play bass guitar for, circa 1995-2000). I mainly wanted to hear what they sounded like, namely how Louie was getting along in his bass playing (he’s following in my footsteps, lol!). I just sang along and played bongo drums.

Right after that I shot down Highland/La Brea to get to Colver City where I accompanied Room To Improv
at a monthly improv show organized by the folks at Nation of Improv. I brought my old Alesis QS-6 for that one since it had all the sound, plus drums. It was great to see RTI perform along with other groups, to see them get involved in the scene.