Soul Barkada Gets Some Airtime on ‘Kababayan L.A.’ 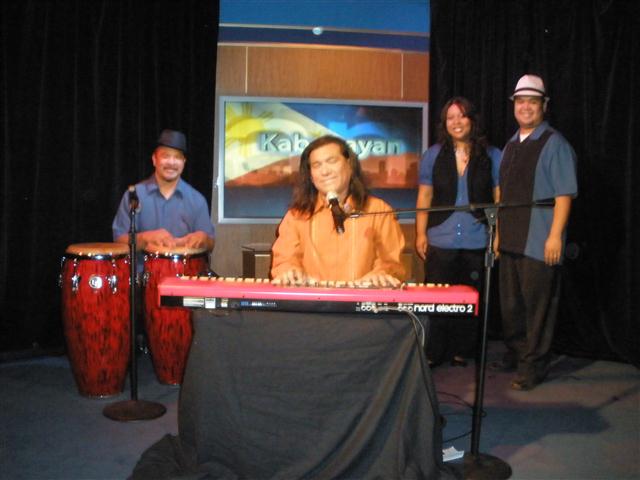 Louie, Lisa, Keith and I converged at the KSCI studios in West Los Angeles, just across Bundy Dr. from the Fox 11 studios. The LA 18 studio was located in the first floor of a low-rise office building and we set up for our acoustic performance immediately. We were told beforehand about the sound configuration – 3 mics and 1 D.I., that’s it.  They would only tape one song, although we came prepared to sing two songs – our original, “Brand New Thing” and our cheeky bossa-nova version of the Filipino classic, “Dahil Sa Iyo.”

We wanted to do the latter, but there was a shortage of microphone stands in the studio, which was crucial since Louie and Lisa also played some hand percussion (claves and egg shaker, respectively). So we decided to soundcheck and go with “Brand New Thing,” when the show’s host, Jannelle So, rushed into the studio and interrupted the soundcheck by exclaiming, “Wait! I thought you were going to do “Dahil Sa Iyo!”   The show’s topic was Philippine Independence Day (June 12), which was why.

We all looked at each other, trying to figure out how to MacGuyver this one, since Keith had his congas mic’ed and my vocals were mic’ed as well (My Nord Electro 2 keyboard went through the D.I.). So then Lisa offered to hold the egg shaker with her left hand, the mic with her right, and share it with Louie, who played claves with both hands. Problem solved!

We did the song in one take. There was one tiny keyboard blooper on my behalf  but it didn’t detract from the performance (plus the bum note was still in key, so it wasn’t really a mistake, was it?).

After the song, we packed up our gear and the stage was cleared for the talk show portion. The show was not taped live (the taping lasted between 11:30 a.m. and 1 p.m.) but the recording happened in more or less real time with few delays in between shoots. The first pair of guests were two women from LAFACE (no, not L.A. Reid and Babyface’s record company), which was an organization of Filipino employees of the City of Los Angeles (which, incidentally, Louie and Keith could qualify for), talking about their Philippine Independence Day event tomorrow at City Hall.

While we waited, I recorded this:

When they were done, Jannelle interviewed Keith and I. We made sure to mention the fact that Keith met me at the Festival of Philippine Arts and Culture, and also plug our upcoming Lotus Festival gig, which will be exactly a month from today.

I must say, that though we weren’t nervous or anything, she did an excellent job of easing us into the taped interview via some chit-chat before the tape rolled. She mentioned about eating cereal for breakfast and also asked us some prep questions (and yes, one of them was the prerequisite one of whether we spoke Tagalog or not, LOL). I was glad we got to tape the performance before the interview, the interview was so casual and relaxed. I would have been kind of unfocused had we done the performance afterward.

It was rather quick, she asked us how the band got formed, where we play, etc. I winced when the on-screen graphic read, “Elson & d Soul Barkada” and asked them to correct it after the taping, but the staff said that it was done because the screen couldn’t accept enough characters…ooookay then). At the end of the segment, the song performance was shown on the monitors in real time, so we watched it.

After the taping she said we could return to the show to plug our eventual album release, and have us play 3 songs and dedicate the entire show to Elson and the Soul Barkada. Wouldn’t that be something! We also got a picture with Jannelle. 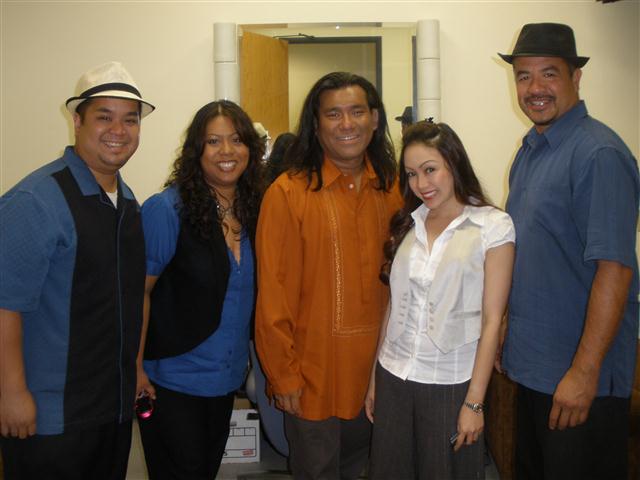 The show aired at 4:30 p.m. and I got back home in time to watch it. Though LA 18 broadcasts in HD, they tape in 4:3 aspect ratio (and show that in stretched 16:9) so I made sure to watch it in 4:3 :). It’ll be on YouTube in a few days, after airing in syndication in Hawaii on Sunday. Will post it here when it’s ready!