Doin’ It, You Know 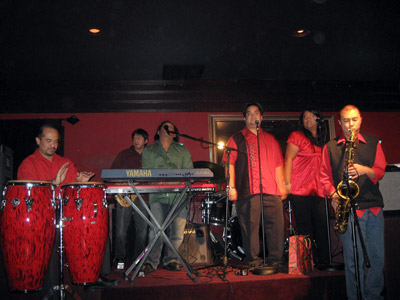 The full 8-piece Soul Barkada did its thing on Friday night at The Derby in Los Feliz. We were part of a benefit show organized by the lovely Czarina Saba from the acoustic trio Todo Azul which featured our respective bands, as well as fellow Filipino American bands Apartment 92, Linggo, Late Night Merienda and CommonAlien. The proceeds of the show went to support the anti-povery programs of Gawad Kalinga in the Philippines.

The show was organized via MySpace messages and while I’m trying to say away from limiting ourselves to the Fil Am scene (nothing against it, just trying to move on to a larger audience), this show was at a fairly well-known venue and it was a noble cause, so how could we pass this up?

It didn’t start out so well. I was really disappointed at the venue, namely that they had very artist-unfriendly loading procedures and the room we played in had a late 70s-era 8-channel mixing board – with only five of them functioning! Ugh. I also got a little exasperated with the sound dude who made us set up in such an unorthodox manner. I also had fun giving him ‘tude (hey, it’s not every day I get to be an asshole, so why not), being extremely condescending. To put it short, we expected a lot more from the freaking Derby!

But we put on a show, the third band up and did our set:

(We were set to play “Love Fall Down” as the fourth song, but due to time constraints and logistics (it involved moving a keyboard around), we cut it from the set).

Basically, the set worked, people dug the sing-a-long at the end of “Brand New Thing,” I sang a faux-intro of a solo rendition of “White Christmas” which led to the Donny Hathaway cover, and the groove and Mardi Gras beads not only got people dancing, but people from the other room curiously checking us out.

The set ended with a thundering ovation. We were all on a performance high – after playing to relatively empty rooms, ,this was validation for all we’ve worked for. Wow…other people commented that (not intending to be competitive) we set this standard for energy that some of the other bands found hard to match.

After the show, since all eight of us were there, we stood out on Los Feliz Blvd for an impromptu photo session while Dennis’ cousin Chad snapped pics of us.

Great way to end the year…now to look forward to 2008 (with more shows and finally that album release!)