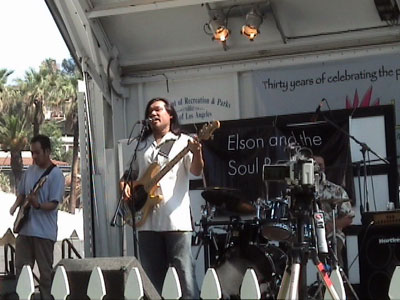 The Soul Barkada finally played a show, albeit downsized to all but three members: Miguel, Vince and myself – this time on bass guitar. The previous week’s rehearsals gave me blisters on the fingers of my right hand, but it was all worth it. Usually accustomed to playing in the evening, we had to deal with hotter-than-normal temps, but hey, it was this or no show. Speaking of no show, Miguel forgot to bring his cymbals, and the previous band’s drummer wasn’t accommodating, so he had to get his parents – who were there at the festival – to fish the cymbals all the way from El Monte and back. Fortunately with only about 10 minutes to spare, the cymbals arrived! Dunno why the soundman gave me the funky slapback echo in the last song, but hey…whatever moves people. In all an enjoyable show despite the different sound and altered lineup. I do love playing bass – sometimes.