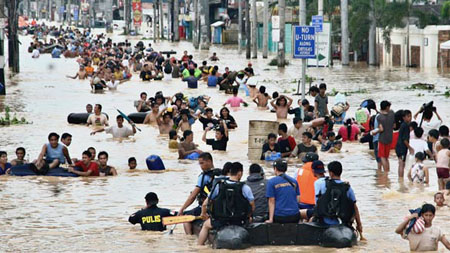 In late September and early October, typhoons Ketsana (a.k.a. Ondoy) and Parma (a.k.a. Pepeng) ravaged the northern half of the Philippines, including severe flooding in the Manila area. Since then, many donation and aid efforts have been launched worldwide to respond to this tragedy. Personally speaking, my friends and relatives there are alive, although one of my nephews in Manila nearly drowned in the floodwaters. A few of my friends’ families suffered major damage or losses to their homes and possessions.

Over 500 lives were unfortunately lost, but the after-effects of the typhoon can claim many more, especially from exposure to bacterial- and toxic- infested water, contaminated drinking water, and the threat of diseases like malaria. Medical emergencies and health/disease concerns haven’t been emphasized as much in current relief efforts, so I’ve organized A Flood Of Hope, which comprises of a concert on Saturday, October 24 and a complimentary fundraising drive through October 30, to raise funds for medical aid in typhoon-ravaged areas of the Philippines. Elson and the Soul Barkada will perform, along with our friends Random Ninjas, Kapoteng Bakal and other artists to be announced! 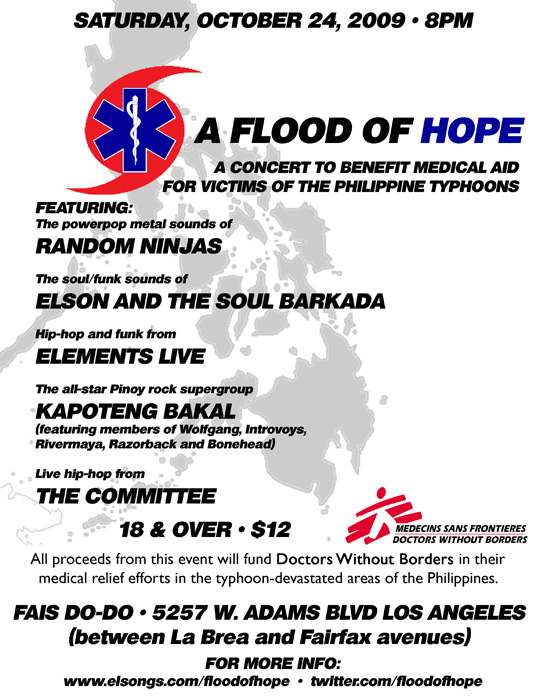 100% of the proceeds will go to the international relief organization Doctors Without Borders, who have already sent out response teams to the Philippines.

In addition, we are also launching a community-based fundraising drive. If you’re coming to the concert, start your own mini-fundraising drive amongst your friends, family, co-workers, classmates, members of your church, associations, clubs or any other group of community you belong to and have them contribute to the cause as well!

For example, you can contribute $20 by yourself, but have 20 people submit the same amount equals $400! In this economic climate, it might be difficult to give a lot, but even if you donate a small amount, multiply that by spreading the word!

You can submit checks at the concert. Can’t make it? Then mail them to the Fundraising Drive address below by October 30. All collected funds will be submitted to Doctors Without Borders on November 2.

The Fundraising Drive:
Mail your donation (checks/money orders only, no cash or material donations accepted) by Friday, October 30 to:

MAKE ALL CHECKS PAYABLE TO: “DOCTORS WITHOUT BORDERS.”