Playin’ some some P-Funk (“P” for political)! 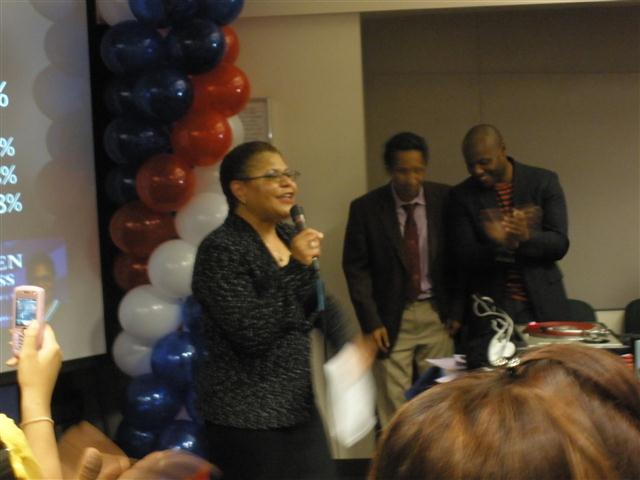 We rocked the Karen Bass Election Night Party last night, which soon became a victory party, with her garnering 85% of the vote to win the Democratic Party nomination for the 33rd District Congressional seat.

It was five of us – myself, Keith on percussion, August on guitar and a couple folks I got for the gig – Russell Walters, a bassist whom I play with at the Midtones jam session in Chinatown, and Luis Enrique Lopez on drums, whom I actually met at the Conan O’Brien rally back in January. We did two sets — doing some socially-conscious ’60s and ’70s soul covers from Stevie Wonder, Marvin Gaye and the Isley Brothers, and another set with “The Karen Bass Song,” as well as tunes from Sam Cooke and Harold Melvin and the Blue Notes.

It was pretty rockin’, even without us there they had some of the best music I heard at any political event. The DJ was Marqueece Harris-Dawson, who is the executive director of Community Coalition, a nonprofit organization that Bass herself started years ago. We fit right in with the soul and funk tunes he played.

Our good friend Eric Garcetti was there as well, who did a welcome address, as well as several other elected officials, many of whom dug us, such as L.A. County supervisor Mark Ridley-Thomas, who gave us this, “Yeah, I feel the groove” kinda gesture, which prompted me to spontaneously give him a high-five, which he returned, and Congresswoman Diane Watson (whom Karen Bass will be succeeding), who gave us a favorable gesture as she passed by and told me personally that she totally dug our sound!

In addition, there was a Korean drumming troupe, a drill team from Leimert Park and a Michelle Obama lookalike/impersonator.  A great night for all. Congrats, Karen!