Home » Elsongs Blog » News » ‘Play Me, I’m Yours’ Street Pianos in Los Angeles – I Should Be Busy For A While

‘Play Me, I’m Yours’ Street Pianos in Los Angeles – I Should Be Busy For A While Something cool is happening in Los Angeles for the next three weeks: 30 upright pianos, each of them decorated by local artists, will be placed in various locations around town for people to play. It’s a public art installation called “Play Me, I’m Yours“ which originated in the UK a few years ago by artist Luke Jerram, and it has been traveling to various cities around the world. From today until May 3, the pianos are ours to play.

I caught my first glimpse of one last night at Union Station after returning from an event in Pasadena. While changing trains, I saw it standing there, and, since it was left alone there, I decided to do as it said. I just improvised on some chordal stuff, and was surrounded by people taking cellphone videos and pictures of me. A few people got up and talked to me, and I got someone else to play as well. The object was social interaction, and it happened.

I asked one passer-by to take a video of me playing, and I uploaded it onto YouTube when I got home.

And the website LAist.com was nice enough to feature me on their website today! As a regular visitor to their site, I was a little surprised to see me on there! 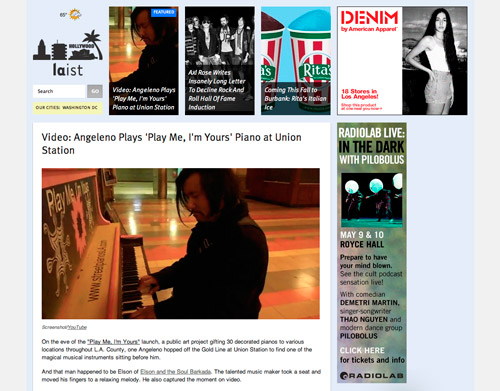 I’m going to make it my personal goal to play all 30 of these pianos. A few are as far aways as Claremont or San Pedro, but I’ll make it a point to visit them, and play them by the time this installation closes on May 3!

Post Tagged with : Piano, Play Me I'm Yours, Street Pianos