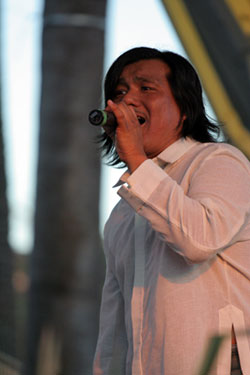 Elson invites you to listen to his soul.

The singer/ songwriter/ multi-instrumentalist, born and raised in the diverse Los Angeles community of East Hollywood (“I’m just a Filipino kid who grew up listening to black music in an Armenian neighborhood where people spoke Spanish and ate Thai food,” as he describes himself) has always done things a little differently.

In the ’80s, Elson Trinidad was no normal teenager. Instead of hanging out in malls, he was obsessed with synthesizers and drum machines, inspired by British new wave/techno-pop and early hip-hop. He spent many a summer vacation recording his own music on a  4-track cassette recorder.

In the ’90s, instead of playing in three-chord alterna-grunge bands, he opted for the more jazzier, funkier side of things, playing in acid-jazz bands in venues alongside local artists such as the Black Eyed Peas and Ozomatli.

In the early ’00s, when dance/electronica made its peak, instead of merely spinning records, he opted to perform his electronic rhythms live – having performed  under the name e:trinity – and sampled sounds and influences from Asian music as well.

Now, this music artist once again reinvents himself, making his own original flavor of soul/R&B music, singing from his soulful, 3 ½-octave range voice, honed over the years from school choruses, karaoke nights, jam sessions, local bands and gospel choirs.

Elson has also had the opportunity to perform with one of his biggest musical influences – Stevie Wonder – in 2009, and also performed with members of The Black Eyed Peas in the 1990s.

Elson’s voice has graced such venues in Los Angeles as The House of Blues Sunset Strip, The Greek Theatre, The Cathedral of Our Lady of The Angels, The Avalon Hollywood and Grand Performances at California Plaza.

Sensing that soul has lost its emotion and R&B has lost its “B,” Elson hopes to once again do things a little differently, this time opting for a more original soul sound, flavored with jazz, funk, electronic and world influences, rather than merely imitating today’s artistsdu jour.

Elson is currently playing live around his hometown of Los Angeles backed by The Soul Barkada, a band of his superbly talented musician friends and is working on their upcoming debut album, entitled, Brand New Thing.