I probably never have been very vocal about this publicly, but one of my favorite bands ever is the British jazz/funk/pop band Level 42.

Most people, especially in America, know them as a two-hit wonder, through their mid-’80s hits, “Something About You” and “Lessons In Love.” Those hits hooked me in too, but in the pre-Internet era, reading about this band from various imported UK music magazines I was inclined to read as a teenager (and beginning musician) got me totally curious. By the time I heard their first note, I was hooked.

So for me they’re more than just two-hit wonders, they have a career that spans 30 years and 12 studio albums. Their music was the near-perfect balance of UK ’80s new-wave and the funk and jazz music that heavily influenced my musicianship in the last two decades. As a singer, keyboardist and bass player, Mark King and Mike Lindup. the band’s founding bassist and keyboardist, respectively, were great influences on my musicianship. Even the band’s 5-minute song lengths are the primary reason why my compositions average about that length.

The only problem was, due to lack of promotion support and personnel changes, Level 42 had not toured the USA since 1987. I remembered exactly 23 years and one month  ago getting tickets to see the Thompson Twins (by then a duo) at the Greek Theatre, with Level 42 as the opening act. But (again, this was the pre-Internet era), an unexplained circumstance caused the openers to cancel and I went to the concert (I was still a Thompson Twins fan anyway; my first concert ever was theirs at the Hollywood Bowl in 1984) albeit with Chris Isaac as the opening act. No disrespect to Isaac, but it was a bittersweet night for me.

Over the years, I got to know other Level 42 fans, in both real life and online. Shortly after discovering the Internet in college, I was one of the charter members of the Level 42 listserv, administered by Boston-based Eric Hansen. In 1994 their Forever Now album was released, and the people on the Listserv posted rumors, reports and possible tracklistings. I had to buy it as an imports. Still, it was exciting.

But all good things must come to an end. The band announced their ending shortly afterward, and while Level 42 wrote its “-30-,” my musical path continued towards Acid-Jazz, Drum N Bass, UK Garage, House and other forms of dance/electronica.

In 2001, L42’s slap-happy bassist and leader Mark King commenced touring Europe with  his younger brother Nathan on guitar, one of their previous drummers Gary Husband, and other musicians as “Level 42.” In 2006, founding keyboardist and co-vocalist Mike Lindup re-joined and they came up with their 12th studio album, Retroglide.

Earlier this year, the news broke: To celebrate their 30th anniversary, they were to tour the US for the first time in 23 years.

So it was a must for me to be there last Saturday at Downtown Los Angeles’ Club Nokia at LA Live.

It was more than a concert, it was a convention; real-life and virtual friends who were fellow Level-headed people were all there. Many of them had seen other shows in this tour, especially those in San Diego and Anaheim earlier in the week. My friend Evan, who got me my ticket, had seen them in New York the week before. Some donned L42 t-shirts, many brought mementos to sign (it was standard procedure for the band to meet fans after these US shows). As someone who’s not into the whole anime/comic book thing, this was my version of doing the fanboy geek thing.

Speaking of fanboy geeks, this was my reaction when the band played their opening notes:

The band played a 14-song set that seemed to go by in a flash. It was so unreal to me to see these people, especially King and Lindup, I reacted not by clapping or whooping, but by letting out a primal, guttural, “AAAAAAAAAAH!!!” after every song, after every cool lick, after every bridge – things I could only hear before through the aid of an analog or digital playback device, but never before in person.

There were several hundred fans at Club Nokia,  most in their ’30s to ’50s. The crowd was interestingly diverse, I saw people of all colors represent as fans – but that’s typical of a true Los Angeles crowd. Although several drove or flew in as their tour only touched on 10 US cities, pretty much all of them either in the East Coast or West Coast, so people flew in as far as Canada to see the band play.

The thing that tripped me out the most was the communal experience of their music, which had, over the decades, been something largely enjoyed by myself, or with a couple of friends at the most. The fact that some strangers knew all the words to their 1983 UK hit, “The Sun Goes Down (Living It Up)” was something I wasn’t used to.

The band, long known for its extremely high level of musicianship for a pop group, played a tight, well arranged set with much energy throughout. My only complaint was that it was way too short. By the time they reached “Lessons In Love,” though I was elated, I was also lamenting the fact that the concert was nearly over. If U2, who has also been around for three decades, can pull off a 3-hour show, why can’t these guys? For all I care, they can just make up stuff – jam. We’d still eat it up.

They finished with a two-song encore at the bookends of their contiguous career: 1980’s “Mr. Pink” and 1994’s “The Sunbed Song.” It was too cool. But it wouldn’t hurt to hear more. 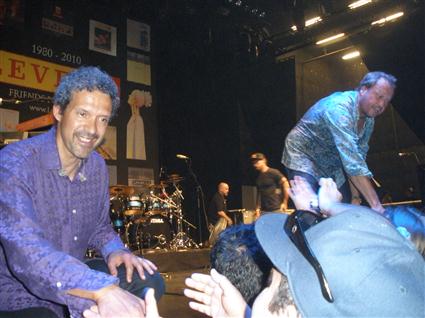 At the end of the show the diehard went up to the stage and shook hands with King and Lindup. I went over to Lindup and told him how much he influenced me as a musician. He stood there and listened to my testimony intently and seemed real humbled by it. How awesome. And I gave him a burnt CD of some Elson and the Soul Bakrada songs (You never know…). Other fans showered him with praise, one, presumably another musician, said, “You’re the reason why I work…” Other fans pleaded him to stay with the band (as he only re-joined in the past four years). He was also asked about his solo projects, and I also asked him about his Favoured Nations project (with ex-L42 drummer Phil Gould), a band that plays every so often in London. But he replied, “Oh, I don’t know if that will happen anymore.”

Here he is, chatting with fans in front of the stage (And that’s my CD  he’s holding in his hands!):

After the band left the stage, I followed the group of some two dozen fellow L42 fans who converged before the show for dinner at the nearby ESPN Zone up to the  Club Nokia’s VIP lounge, which was open to all after the show. An ’80s DJ played music for us 30-something-and-older types. But the best part came: The band came out to meet the fans.

A lucky few got passes to the sunken-and-roped-off VIP lounge section, but a lot of pass-sharing went on between us fans. Unfortunately after one was given to me, a staffer confiscated it. Still, King and Lindup even stood at the perimeter of the roped-off area to interact with fans.

It was here where I got a picture with Lindup, who was wearing a Dave Smith Instruments Mopho t-shirt. I made a comment about it and asked if he endorses DSI instruments (as he plays a DSI Prophet-08 onstage). He clarified he didn’t, but did say that representatives from the Northern California-based synth company did come to L42’s San Francisco show the night before, and that he recommended some improvements to the synthesizer as a veteran user of the Dave Smith-designed Prophet-5.

He also said he programmed his Prophet-08 synth himself, trying his best to manually transfer the Prophet 5 sounds. I had him sign my CD booklet of L42’s World Machine album – the first album of theirs I bought (though that one was on cassette…) 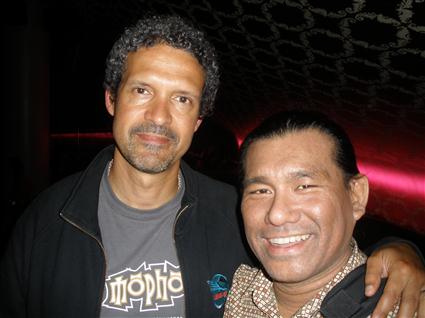 Of course the experience wouldn’t be complete without meeting Mark King himself, also a bass playing influence (I can sing and play bass simultaneously too, but not so much the rapid slapping thing). My friend Craig, who played bass in a few bands with me some 20 years ago, had an emotional experience finally meeting his 4-string hero that night. Someone standing nearby commented, “Man, that’s like someone meeting Miles Davis!” I also had King sign my CD booklet and got a pic with him. I told him about how his music influenced me and coyly told him, “If you guys come here again and need an opening act, lemme know” while handing him my CD.

“So you’re the man?” he said, glancing at the CD. “Elson is your name?” he continued.

I barely replied with but a mutter when he finished with, “Elson…Trinidad? You’re a f-cking legend!”

I stood there, dumbfounded, as he moved on to another fan. 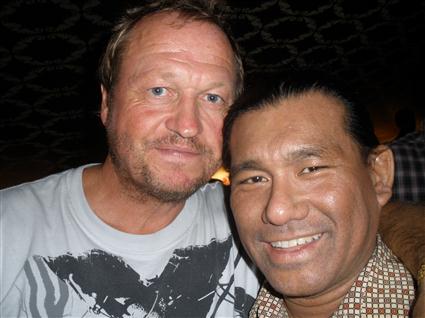