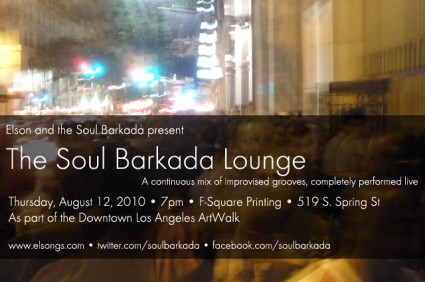 Our next performance is not a concert.

We’ve been playing live for the past 6 years, playing original tunes that I’ve written, or classic soul/funk favorites and rehearsing them to the best of our ability.

But when the opportunity came up, I thought it would be cool to do something a little different.

What if we played for several hours, not a set (or sets) of tunes with beginnings and endings, but one long, continuous blend of music, evolving and changing over that duration, like a DJ’s mix – but played completely live? And what if it was all totally improvised?

That’s the concept behind The Soul Barkada Lounge, which will take place on Thursday, August 12 from 7 to 11 p.m. at F-Square Printing, on 519 South Spring Street, as part of the Downtown Los Angeles ArtWalk.

The monthly ArtWalk (every 2nd Thursday) brings tens of thousands of people on the streets of Downtown Los Angeles (the Gallery Row district) all night. Much of the art gallery events are open from afternoon until 10 p.m,, with the restaurants and bars open until 2 a.m. It’s an awesome display of street energy and creativity in all forms.

So instead of doing just a concert, I thought it would be cool to show up, completely unrehearsed, at a local print shop/gallery/cafe and do this. Though technically it’s a “jam session,” I want to avoid that term. It’s not an open jam but only open to members of our band plus other musician friends of ours. We’ll try to create something interesting, take turns holding down instruments, and who knows how people will react? We’ll just see what happens. Isn’t that what art is about, taking risks?

Oh yeah, the event is completely free, by the way…